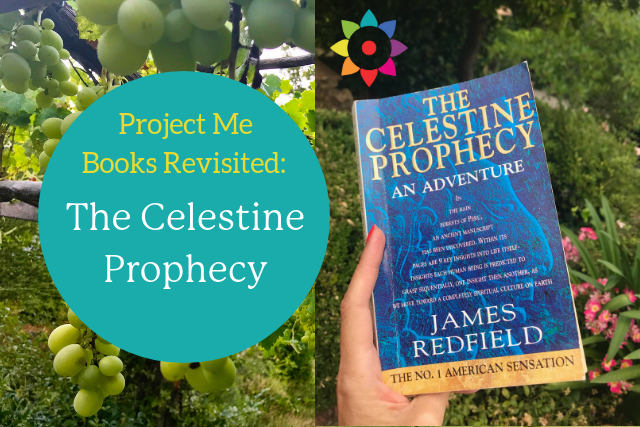 In the first of this new series of Personal Growth Books Revisited, I’m featuring a book that I first read in 1994 and didn’t pick up again for 23 years,  The Celestine Prophecy by James Redfield.

NOTE: I have turned this into a podcast episode and it comes with notes about each of the nine insights and some journaling prompts! See episode 1 of the Project Me Podcast

I posted a picture on social media recently of me holding the book and was amazed at how many of you also read it in the 90s and expressed a desire to read it again. This book is particularly special for many of us because it was the very first entry-level read that got us into the whole wonderful world of personal development. It was an international best seller and was later adapted into a film, which I’ve heard was pretty poor.

The story of how I first came to read the Celestine Prophecy could in itself be made into a movie.  I’ll give you the bare bones of it here and then get to why I’m happy I stumbled upon it again so many years later.

It was 1994, I was in my mid 20s and in a very unhealthy relationship. We were meant to be spending a few days together in sunny Spain, but he never turned up at the airport and I ended up in Barcelona on my own, feeling completely lost and betrayed.

In a random tapas bar I did a double-take at an older gentleman sitting at a table near the window. I felt compelled to go over and tell him that he reminded me of my uncle Jim in Minnesota. He stared at me with wide eyes before replying carefully that his name was also Jim – and he was from Minnesota. The coincidence felt too great and I didn’t believe him, until he produced his Minnesota driver’s licence. It was indeed true!

Over a beer and some tapas he told me about a book he’d just finished called The Celestine Prophecy which said that we shouldn’t write coincidences off as they often contain important messages if we’re paying attention. He believed there was a deeper reason why we’d met and we decided to hit some of the Barcelona tourist attractions together to see what that might be. It would take me several pages to write about the crazy two-day adventure we had, including me getting mugged at gunpoint, being followed by a gang member on two trains, jumping over barriers and hiding out in cafes. It was like something out of a John Grisham novel and I wondered later if I may have dreamt the whole thing.

As we parted ways, Jim wrote ‘The Celestine Prophecy’ on a folded napkin and I put it into the side pocket of my bum bag. A year later, I was in a tiny bookshop in Petaluma, California and happened to be wearing the same bum bag. I reached inside, pulled out that napkin and bought a hardback copy of The Celestine Prophecy. I read the entire book in a couple of days and it blew my mind.

It’s a fictional adventure set in Peru which weaves together nine insights as the main character seeks to discover each one and learn their meaning. I felt a real sense of enlightenment as it was the first book I’d ever read that made me think about my thoughts creating an energy and how when people interact with each other they exchange energy, often in a very negative battle for control. It made me think a lot about the control dramas my boyfriend used on me. Thankfully we split up soon after I’d finished the book.

As my first spiritual / personal growth book, it kick-started what became my insatiable appetite for all things ‘woo-woo’.

Within a few years, however, I’d written off The Celestine Prophecy as ‘kids’ stuff’ and saw it as very dumbed-down fiction, attempting to hold beginners by the hand by weaving spiritual messages around a very thin plot.

I was at my father in law’s house in Tuscany where I’ve been coming for 22 years, having married the cute Italian I met after the bad boyfriend and I broke up.

Amongst an overcrowded bookshelf, one title jumped out at me. The Celestine Prophecy! I picked it up, curious to discover what it had been about this book that made such a big impact on me all of those years ago. I read it again in one sitting.

I was amazed to discover a small section in the book that had to do with parenting. I was never even thinking about having kids back when I first read the book.

The worst thing that can be done to children is to drain their energy while correcting them. This is what creates control dramas in them. Adults must give them all the energy they need no matter what the situation. This is why they should always be included in conversations about them. (Not answering questions on their behalf or not directing questions about them to them.) And you should never take responsibility for more children than you can give attention to. Only one adult can focus on and give attention to one child at a time. If there are too many children for the number of adults, then the adults become overwhelmed and unable to give enough energy. The children begin to compete against each other for the adults’ time. Adults often glamorize the idea of large families and children growing up together. But children should learn the world from adults, not from other children. In too many cultures, children are running around in gangs. Humans will slowly understand that they should not bring children into the world unless there’s at least one adult committed to focus full attention on each child. Humans will learn to extend their families beyond blood ties so that if both parents work, someone else is able to provide one on one attention.

And remember the coincidence of meeting Jim from Minnesota in Barcelona? The book says,  ‘Sudden spontaneous eye contact is a sign that two people should talk. A sense of recognition, seeing someone who looks familiar, even though you know you’ve never seen the person before. We are members of the same thought group with certain other people but groups are usually evolving along the same lines of interests. They think the same and that creates the same expression. We intuitively recognise members of our thought group and very often they provide messages for us. There is nothing mysterious about it. It is a matter of looking closely at expressions. When you are appreciating someone at a deeper level, you can see their most honest self beyond any facade they may put up. When you really focus at this level, you can perceive what someone is thinking as a subtle expression on their face.’

I have now started a Book of Coincidences to begin recording past coincidences I can recall in my life and where they led me, as well as adding new ones – even when I’m not sure of their meaning yet. I’m paying much more attention to coincidences as well as listening to my inner knowing; my intuition. 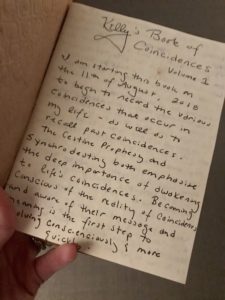 Now that I’ve been studying The Law of Attraction and am deeply fascinated with how all things are made of energy, including our thoughts and emotions, I’m blown away by how such a simple story as The Celestine Prophecy touches on these things in a very profound way.

‘When we appreciate another person, really focus on them… we can then send them energy, lifting them up.

The first step is to keep our own energy high, then we can start the flow of energy coming into us, through us, and into the other person. The more we appreciate their wholeness, their inner beauty, the more the energy flows into them, and naturally the more that flows into us.

Two or more people doing this together can reach incredible highs as they build one another up and have it immediately returned.’

This got me thinking about the collective energy we feel when we are a part of a group or community, as well as the bigger impact we could have on the world if everyone were practicing this virtue of ‘uplifting others’. When we are living our life ‘in flow’ we can’t help but feel a greater connection to others.

When we are not in flow, we feel disconnected from ourselves and the world around us. This makes us feel anxious or frustrated, so we distract ourselves with anything from excessive busyness, over-shopping, compulsively TV watching, scrolling the internet and social media – all the way to alcohol and drug addition. Doesn’t this describe too much of modern life these days?

We need to get into flow and seek deeper connections that bring higher levels of fulfilment. Then we can put that energy out into the world, attract more of it back, and a beautiful exchange occurs.

Soon after I re-read The Celestine Prophecy I decided to finally create an online, global community.  It’s called Project WE and I am beyond excited to be launching it in January 2019.

When you work on your Project Me with others you lift each other even higher and achieve things you might never do on your own.

Project WE takes place online so women can join from anywhere in the world. It includes a private community for support, camaraderie, motivational calls to action, and regular challenges to create positive habits which support your dreams and goals. I’ll host an online interactive workshop every month and bring in guest experts in all areas of life to help you you move forward.

I love helping self-aware women with a growth mindset to shine – and Project WE will facilitate a collective consciousness in which we can learn and grow together.

I’d love to start a book club within Project WE so we can dive into Personal Growth books together. And maybe even revisit some old faves, like The Celestine Prophecy.

Click here to find all of the juicy details about Project WE and to become a Founding Member.

There’s so much more I could say about my experience of re-reading The Celestine Prophecy. Even after countless book culls over the years, I discovered my original hardback copy in a drawer – along with the Experimental Guide and The Tenth Insight, also by James Redfield. I’m diving into those next. Now feels like right time for people to be reading this book either for the first time, or to re-read it with a fresh perspective.

So was it a coincidence that I noticed this book on the shelf in Tuscany last summer?

NOTE: I have turned this into a podcast episode and it comes with notes about each of the nine insights and some journaling prompts! See episode 1 of the Project Me Podcast

In the comments below I’d love to hear whether or not you’ve read The Celestine Prophecy? What’s a Personal Growth book that made a memorable impression on you? Have you read it again since?