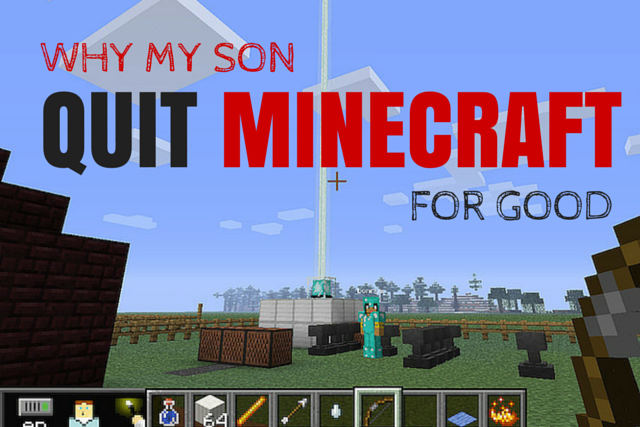 Why My Son Quit Minecraft For Good

When my 12 year old son told me last week that he’s quitting Minecraft for good I nearly fell off my chair.

He realised he was addicted when he found himself bored while playing it, yet unable to stop himself.

I asked him if he didn’t want to just ease out of it slowly, but he said he wanted to go cold turkey.

I explained that when we give up an addiction we need to replace it with something else or we’ll just go into default mode and carry on.

So he rattled off a whole list of other activities he’ll do on his own such as: play the piano, sing with his microphone, write a song, play ping pong against the wall, make bracelets, make a video, make a fort, etc etc…

Whew! I’m so happy it was him quitting on his own and not me forcing him to.

Now I have a confession to make.

For over two months I’ve turned a blind eye to the amount of time he’s spent on Minecraft.

It felt hypocritical for me to tell him to get off our spare laptop when I myself was on the main computer and his older brother was on his laptop preparing for exams. Guilt was creeping in, but I chose to ignore it.

Although it sucks to admit it, his preoccupation with Minecraft was serving a purpose for me.

I could get on with my own stuff uninterrupted.

I’d always raised my kids with very firm boundaries around screen time. My first born never even saw the TV switched on until he was two. I’ll never forget the way his eyes filled with shock and wonder when that black box in the corner suddenly lit up. These were the days before iPads and Smartphones, but even then I never wanted to use electronics as a baby sitter.  I’m sure it made life more challenging for me, but I stuck to my values (back then).

I invested a lot of time in teaching them board games and card games, how to make a good fort and reading to them every single night until they were old enough to read to me.

And my investment paid off. They played with each other, doing all of these things I’d taught them and more – until my eldest turned 14 and suddenly homework and DJing took over.

We moved to Madrid when my boys were ten and seven. Unlike their old school, their new one had computers. Neither of my kids knew how to use a keyboard! I’d never allowed computers, always encouraging outdoor play, indoor board games and their imagination.

So how is it that after all of those early years of diligence, MY son could be addicted to a computer game?

I took my eye off the ball that’s how. I got lazy. It felt easier to let him do it so I could get on with my own stuff. Yep. I was letting the computer be the babysitter. Something I always vowed I wouldn’t do.

I was wary of Minecraft right from the beginning and set up timed usage that my boys earned by doing their household chores. They were devastated when their allotted time ran out and would plead for more.

They set up a very compelling presentation to explain Minecraft to my husband and I. They demonstrated how creative it is and how having to stop at just half an hour meant they couldn’t finish what they’d started. (I later realised it’s never finished…)

So I began to allow an hour, sometimes two.

Every summer I’d set up a Minecraft schedule. X amount of time doing other things = x amount of computer time.

In order to remind them of all of the fun stuff they used to do before Minecraft, I got them to create a Not Bored Board. This was a big piece of coloured card board for them to list all of their other fun options. If they were ever feeling bored, they’d just look here for inspiration. It worked a treat. You can see their Not Bored Board here.

Last week when I posted on the Project Me Facebook page that my son had decided to quit Minecraft cold turkey, it got a lot of attention. Everyone wanted to know what made him decide on his own? And now did he come up with this instant list of alternatives?

I believe the reason he recognised his addiction and stopped himself was because deep down he remembered my sermons of past about too much computer time destroying kids ability to play normally. I always talked about how it’s ok to feel bored sometimes and how that allows space to find your true passions.

He remembered all of those time limits I used to enforce. (And he told me last week I was being very slack about it now and that’s how he got addicted. Gulp.)

The reason he was able to rattle off such a great list of fun and creative ideas was because of so many years of making those Not Bored Boards.

As for me, it’s been a wake up call to not become so laid back that I let my values slip. No matter how much I’ve been sold on Minecraft being educational and good for them, I don’t entirely buy it. It’s addictive and it strips away time they could be spending being kids. (The way we used to know it.)

It might involve teaching them how to play again. Getting on the floor and showing them how to build a good Brio train track or how to hang sheets over tables to make a fort and how to set up a pretend picnic inside the fort when it’s done.

It definitely means more messes than allowing them to sit with their faces in front of a screen. But kids can also be taught how to turn cleaning up messes into a another fun activity – if it’s sold to them right. (I always made a game out of it.)

Keeping them away from screens means buying board and card games, sitting down to read the instructions and playing them with them often enough so that they learn how to play them with siblings and friends. It’s an investment that really pays off.

I don’t believe it’s our job as parents to constantly entertain our kids, but we need to invest time and energy in the beginning to show them plenty of ideas – and not kid ourselves that computer games are the toys of their generation.

Dr. Laura Markham of Aha! Parenting has a great article about why unstructured time for our kids is so important – and has a great list of boredom busters to inspire your kids: Why Boredom Is Good for Kids

How to Create a Not Bored Board (my own blog!)

Every Chance to Learn is a great website for parents who want to help their kids to navigate through this digital age. Dr. Kristy Goodwin shows you healthy, safe and educational ways to make informed decisions about how you use technology in your family.

In the comments below please share your thoughts on this. Does your child play Minecraft? Do you ever get lazy like me? Do you find it confusing raising kids in this digital age?