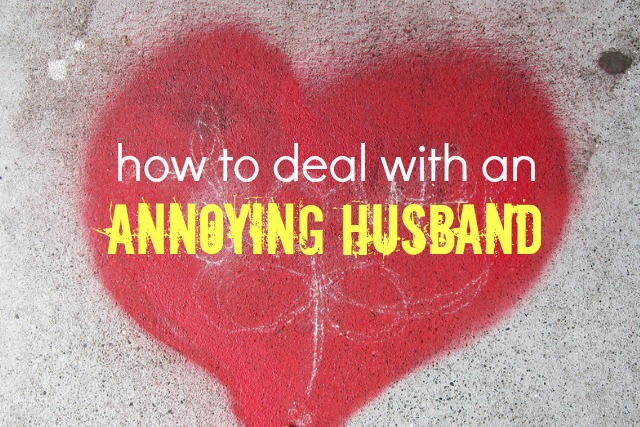 How to Deal With an Annoying Husband

Does your hubby irritate you? Is he slowly driving you mad with his array of petty but annoying behaviours?

Yep. I hear you. After 17 years of marriage I’ve got a pretty extensive list of things that drive me around the bend.

Leaves pans to ‘soak’ rather than just washing them up.

Tells me I have to turn the light off the second HE wants to go to sleep (even if I’m turning the pages silently and have dimmed the light so low I can barely read…).

Doesn’t turn the light off when I want to sleep (and rustles magazine pages in my ear while he takes his own sweet time).

Dumps sweaty gym clothes on top of laundry so everything is stinky and damp.

Doesn’t decide what he wants to eat until the waiter comes, then orders the same thing as me, so now I’m changing my order because I’d wanted us to try different things and share.

to name just a few….

But since we’ve got another estimated 50 or so years together and I do love him to bits, it seems like a pretty good idea to find ways to manage it without losing my marbles. Or strangling him.

Petty grievances can build up and become a slimy residue on the surface of a marriage. (Eeeewww!)

I put a call out to other mothers to ask what their hubbies do to annoy them. Sixty women were very quick to supply a rather sizeable list…

It’s interesting to note that the tidy gals are driven mad by their sloppy counterparts, and the more, er, ‘relaxed’ ladies are irked by their neat freaks hubbies. And there were an equal amount of women annoyed at their chatterbox husbands as there were whose men tune them out or walk away mid-conversation…

Here’s a sample selection of the many grievances reported:

Makes a ridiculous amount of noise when he eats.

Puts the radio on in the morning when I like peace and quiet.

Runs the tap while brushing teeth – at full pelt.

Opens the mail then leaves the ripped envelopes laying around.

Doesn’t want any clutter anywhere ever. I can’t turn my back on anything or it will be tossed or cleaned and put away.

Never EVER puts ANYTHING EVER away where it is supposed to go.

Doesn’t like any messes and he will start washing bowls and cooking utensils while I am in the middle of cooking or baking.

Inability to put his empty yoghurt pots or banana skins actually in the bin.

Has to consider every (and I mean every) option before making a decision.

Lies naked across the bed after morning shower looking like he wants action (and usually does).

When he cooks anything that doesn’t involve a BBQ, he needs A LOT of praise from everyone because it is the best thing EVER (even though it’s one of three variations of stir fry).

Stops by a shop on his way home and doesn’t ask if I need anything.

Sends me roughly 25 text messages while at the grocery store if I send him for a few things. Just pick something! The whole reason you went is because I’M BUSY!

Wakes me up repeatedly during the night by pulling me over (usually by the head) to his side of the bed so he can cuddle me.

Doesn’t listen, pretends to, then asks a question about what I’d just told him.

Tells me every single thought in his head. Endless chatter.

Wants to watch TV when I want to have a deeper conversation.

He talks a LOT while I’m trying to wake up. I’m just trying to get my eyes open and he doesn’t shut up. Darn talkative extrovert.

Will only watch romantic comedies. And can watch the same one at least a dozen times before realising he’s seen it before.

Complains about excessive noise when I’m doing chores – hates when I’m putting pans and dishes away.

Makes excessive noise when he is doing EVERYTHING.

Being overly noise sensitive to children, putting away pans etc. And huffing and puffing about it!!

Turns the lights off even if I am leaving the room for only thirty seconds but insists on having all electrical appliances on standby.

Has the shower curtain outside the bath, instead of inside.

Throws his dirty underwear & socks right next to the laundry bin! Aarrgghhh! So I started putting them back in his drawers. If it’s not in the laundry bin it must be clean right?

Julie’s Three Ways to Deal With an Annoying Husband

Understand and acknowledge that it’s not actually your hubby’s behaviour that’s annoying you – it’s your thoughts about it. Really!

When he leaves his socks on the floor, the lid off the toothpaste or the wet towels on top of clean laundry, what ‘story’ do you tell yourself?

I’m so busy and he does nothing to help me.

He’s deliberately trying to annoy the sh*t out of me!

It’s those pesky thoughts creating your feelings of annoyance, not your hubby (and that’s actually very good news!)

Knowing it’s your thinking that’s the root cause of your annoyance is great news – because your mind, unlike your hubby, is something you have complete control over.

You can choose to change your thoughts, and subsequently your emotional state, at any time.

And knowing which behaviours trigger your ‘annoyance button’ means you can be prepared in advance.

Have 3-5 ‘go to’ peaceful-feeling thoughts up your sleeve that you can consciously select when needed. You’ll need to identify the thoughts that work for you, but examples might include:

Ok, let’s get real for a moment. Sometimes you’re going to want to feel p*ssed off with your husband! Immediately changing your thoughts will not be an option. And that’s ok.

Our emotions are great teachers and part of being fully alive is the ability and willingness to feel the whole gamut of our emotional life. An emotion is simply a vibration in your body – nothing more, nothing less.

So, if you want to feel angry, annoyed, resentful, p*ssed off, whatever – give yourself permission to fully feel* that. When we allow our emotions instead of resisting them, they actually pass through our body very quickly.

*Note: Feeling our emotions doesn’t mean reacting to them. It means simply experiencing the sensations in our bodies.

Then, when you’re ready, go back to Tip 1. Understand YOU are the one creating your negative emotions with your thinking. Not your husband. You. Own it. Take responsibility for it.

Then choose to change it. Or not.

This simple but powerful knowledge gives you all your power back.

I can say that in the past two days since reading Julie’s tips I’ve honestly been bemused rather than annoyed by my husband. My go-to ‘peaceful feeling thought’ has been ‘Well it could be a lot worse. At least he doesn’t ______’. I’ve chosen from a variety of the examples above. (I won’t say which ones in case they’re one of yours!)

I’ve also been more aware of the crap I do that annoys him. We’re two different people in inhabiting the same space and we’re never going to think or do things exactly the same. Rather than knit-picking and getting frustrated in hopes he’ll change, I’m going to stay in my own business a lot more and focus on choosing positive thoughts. Julie’s right when she says that we can’t control our husband, but we can control our thoughts and emotions.

In the comments below share a few of the things that trigger your ‘annoyance button’ and which peaceful-feeling thoughts you could select instead.