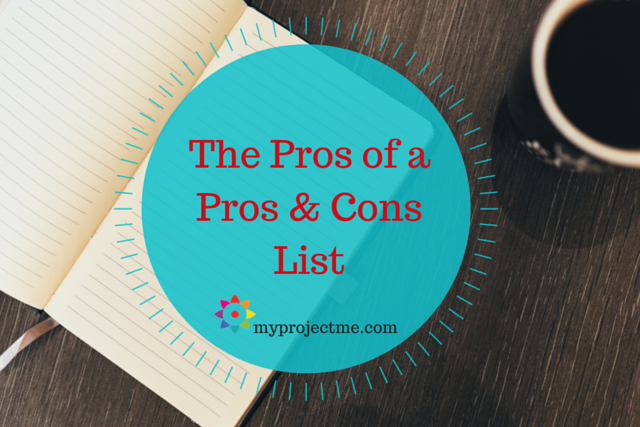 The Pros of Making a Pros and Cons List

Do you ever get bogged down with little daily decisions?

Deliberating back and forth about two options takes up a lot of valuable head space that you can’t always spare.

Forget about pondering over things in your already bogged-down mind.

For easy(‘ish) decisions, nothing quite beats a good old Pros and Cons list. Don’t write it off as being too simple to work. You may be pleasantly surprised!

The next time you recognise that you’re playing a decision back and forth in your mind, whip out a piece of paper, draw a line down the middle and put the pros and cons into two columns. When one column easily outweighs the other, voila! There’s the answer.

Of course the sheer number of reasons in one column doesn’t always outweigh one major reason in another.

This is when it’s good to get clear about your values and what’s truly important to you. Decisions made from the heart usually feel better than ones made only with your head.

Last summer  I needed to make a decision about having our cats looked after while we went away for two weeks.

Our normal cat sitter wasn’t available and they’ve never gone to stay in a cattery before, so I wasn’t too keen on that option.

Our vet told me that her intern student from Austria was looking for accommodation for a month. If she stayed with us, she’d be here over the two weeks we’d be away – as well as two weeks while we were home.

The decision over whether to do this or not began playing on repeat in my mind and as the date grew closer, it was beginning to stress me out.

When I realised this was going on, I sat down and whipped up a Pros & Cons list.

Should the vet student come to live with us for one month?

Someone who loves animals to live with the cats

She can cut the clip their claws and give them their deworming tablets (Won’t have to drive them to the vet for that, which is a nightmare!)

Having her live here for two extra weeks that we don’t need her help (What if we don’t like her??)

Seeing it right there in black and white made me realise what I could do.

I asked the vet for the student’s email and then contacted her. She sounded absolutely lovely in her mail and she also sent me glowing references. I immediately felt better about this option.

Then – eureka! I thought of a friend who was going away too and sending her dog to a kennel. Her family were travelling during the two weeks before we were and she leaped at the idea of having someone stay with their dog instead of kennelling her. A quick no-brainer for her.

The vet student went to my friend’s house for the first two weeks and ours for second. She turned out to be wonderful! We went away with complete peace of mind – and we’ve made a new friend in Austria!

Sometimes decisions come down to our core values.

Let’s look at this example.

Several years ago Christmas was coming up and I was pondering gifts for my two boys. We didn’t have any kind of games console – Wii, Playstation – nada. I’m not a fan of this stuff. Board games all the way, baby!

They were beginning to make noises about wanting a Wii as they’d played it with friends. I was feeling really torn about the whole thing.

My Pros & Cons about buying them a Wii for Christmas looked like this:

They will freakin’ love it.

It solves the dilemma of what else to get them.

Other kids their age have it. They will feel part of the crowd that can talk about this stuff.

They will freakin’ love it. (And never come off it.)

It might take them away from board games and other creative play.

They can always play it at friends’ / cousins houses so need to own one.

I looked at my lists and still felt stuck. The Cons list was longer, but points one and two in the Pros list were having a strong pull. So I flipped my list over and wrote out what was going on in my head:

I feel like I’d be getting this just because it solves the problem of what to get them that they will love. I get great joy out of seeing their eyes light up on Christmas morning. I know they would be over the moon.

But… it goes against my values. I have a thing about kids and video games. I know they will eventually get one, but can they hold off for another year, play with their toys and board games, use their imagination a bit longer?

I knew in my heart what the answer was. I needed to stick to my values and re-address the issue next year. Whew – decision made!

On Christmas morning, after they’d opened (and were delighted with) their presents of board games, art supplies, puzzles and books – my husband, a twinkle in his eye, said he thought there might be one more present from Santa in the other room…..   The boys raced in to find…

It seems some decisions are just out of our hands.

Do you ponder decisions in your head? Stop that right now! Write out a Pros and Cons list to get it out of your head and onto paper.

Your busy brain has too much to process on a daily basis and you owe it to yourself to do this.

Maybe your Pros & Cons list won’t instantly solve the dilemma, but you can’t know until you try.

Share your thoughts about this. Are you a fan of Pros & Cons lists and making decisions on paper? Has this inspired you to start doing it? Is there anything you’re trying to make a decision about right now? Hash it out right in the comments below!

Photo by By Luis Llerena