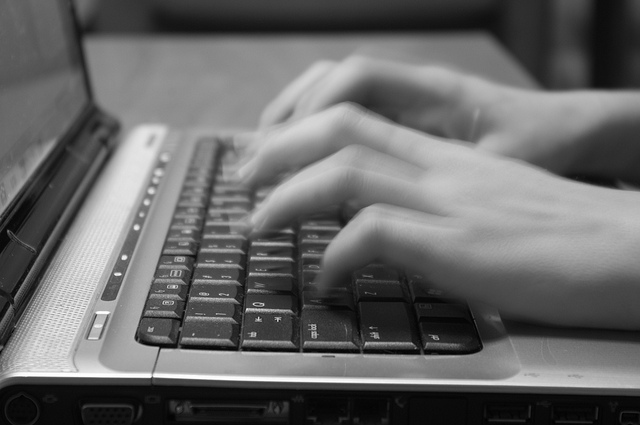 Fallen Out With Your Man? Why Email Is The Answer

You’ve had a major argument with your husband. You both think you’re right. You can cut the tension with a chainsaw. All attempts at communication are blocked by defensive egos – neither of you are prepared to back down.

In our 16 years together, my husband and I have had some ridiculously drawn out arguments. We’re both strong willed and like to get our point across – loudly. I don’t like fighting in front of the kids. I don’t like fighting at all (I’m a lover, not a fighter), but at times it’s dragged on and on. I’m utterly exhausted and just want to agree to disagree.

Do I wave the white flag and surrender? Ha! Never! (And neither does he.) But over time we’ve developed a natural solution to those battles that won’t simply die out on their own.

Email is the answer.

I was the first to send him one a few years ago. He must have realised it was a good idea as he’s often the email instigator now.

Here’s how you do it:

1. Sit down and (calm as you can) draft your partner an email.

It gives you a chance to articulate your feelings and put forward your side rationally. Avoid excessive use of CAPITALS and !!!!!!! or it comes across as shouting, which rather defeats the purpose.

2. Re-read and edit the email before pressing send.

This is crucial. Have you put your argument forward in a way that even a judge would agree with? Have you described how you’re feeling?  Edit out any character assassinations, ‘you always’ or ‘you never’.  Be sure to include something positive, like how much you love him and care about your relationship.

The beauty of an email is that you can express how you feel without being interrupted or getting defensive. He can absorb what you’re saying without added voice inflections, facial expressions or body language. It’s just words on a screen.

Ideally your partner will read your words, see it from your side (without necessarily agreeing) feel touched by your love and desire to work things out – and respond like mindedly.

Then you’ll have a chance to read his side and start making some serious progress towards a reconciliation. Whew!

This doesn’t just work for heated arguments. A friend once saved her marriage with one email.

They hadn’t communicated well for years and were having the same old fights over and over. She’d finally had enough and decided to write him a long email. The process of sitting down and putting all she wanted to say into words forced her to get clear about how she felt and what she needed from him. (The crux of the problem being his drinking.)

She ended the mail by saying that if he came home from work that day and said nothing, it was his signal to her that he didn’t want to fight for their marriage. She’d then begin proceedings to end it. But if he wanted to work it out, he just needed to tell her he was willing to try.

She pressed ‘send’ and had an agonising wait. He returned home from work and went straight upstairs without saying a word. Finally he came down. He’d been researching online and came to the conclusion he did have a drinking problem. He vowed to quit – and did so that very day. All her years of nagging him about his drinking and the growing tension between them – solved with one heartfelt email.

Email might not be the answer to every deep marital problem, but if you’ve never tried it it’s worth a shot.

What about you? Have you ever used email to help your relationship? If not, is it something you’ll try? Leave a comment below. Share this with a friend (and your partner).

Are you receiving our weekly motivational newsletter? Each week we tackle one of your 8 Key Life Areas – helping you find a happier balance. Sign up in the box below. You’ll be so glad you did!