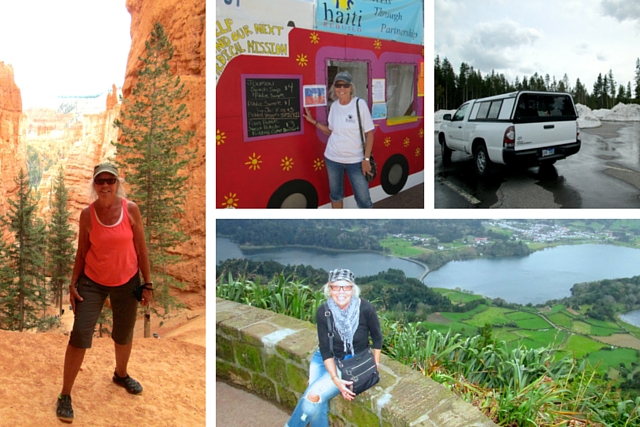 In my post Get Rid of Clutter, I promised to share the inspirational story of my mother who got rid of all of her material possessions.

In honour of her 70th birthday….  Here’s some inspiration to have less things and more freedom.

About 27 years ago my mother sold her big house in Minnesota, all of her furniture and her car and relocated across the country to California. (Sleeping on my sofa until she found a place of her own!)

As a single lady whose kids had flown the coop, she was ready for a new adventure.

She bought a pickup truck and meagrely furnished a small one-bedroom apartment, including mismatched dishes and silverware from charity shops.

She became a true minimalist and loved the freedom it gave her.

She moved to several beach cities over the years and downsized each time, living in small studio apartments.

Ironically, she started working with a corporation who managed self storage units across the U.S. She witnesses first hand how people who aren’t able to let go of stuff actually pay to store it because their garages are so full they cannot even park their car.

She also saw the agony of people who had to go through all their parents stuff when they died, often paying to store it instead of getting rid of it.

Right then she vowed to never do this to me.  Thank you, Mom!

Over the years she developed a true passion for travel and by living so meagrely she was able to go on many adventures and discovered the concept of Volunteer Travel.

She has worked in an orphanage & AIDS hospice in Thailand, fitting shoes on kids feet in Haiti, built houses in the Dominican Republic and worked with sea turtle preservation projects in Mexico.

The next step was when my Mom ‘retired’ 10 years ago, giving up her apartment and furniture and hitting the road in her truck.

Everything she owned now fit in the back end of her beloved Toyota. I’m not kidding!

She drove around America, doing volunteer work in exchange for room and board.

She also discovered seasonal work in National Parks like Yellowstone and the Grand Canyon and worked up in Alaska for a summer.

On a recent trip she even zip-lined from Zambia to Zimbabwe!

All of this is possible because of her minimalistic approach to life.

My mother often counsels other retirees to downsize and de-clutter. It’s a big job when someone else has to finally come in and get the house ready to sell.

Much of the stuff could be sold and donated. She suggests they photograph things before they part with them as they can always look at the picture and remember them that way.

Now this is a very extreme example and I’m not following in her footsteps anytime soon – but it does inspire me to get rid of stuff I really don’t need.

Look around your own house and notice duplicates. Why do you need two ice scream scoops? Or eight hammers? Or Tupperware containers with missing lids. (Believe me, they will never turn up.)

How many times have you had to try three pens before you found one that worked?

Get rid of stuff you don’t need. Throw out anything broken and donate or sell the rest. To quote my mother, ‘You never own stuff, stuff owns you.’

That something in the back of your cupboard that you’ve kept for years ‘just in case’ could be used every day by someone else who really needs it.

Those old frayed towels and sheets? Animal shelters desperately need them. Extra pots and pans taking up massive space? Soup kitchens would be grateful. Clothes you never wear could go to a women’s shelter to help those escaping domestic violence wearing only the clothes on their back.

We drop old toys off to the waiting room of our local children’s hospital where they’re played with every day. I give kids clothes away as soon as they’ve outgrown them.

Try not to be too sentimental. If you begin to view your extra stuff in a charitable light, it’s easier to let go of it.

Release it from dusty attics, grimy garages and closed cupboards and give it a new lease of life.

Never have I given something away and later regretted it. Oh, there may have been a time when I had a retro costume party to go to and thought ‘Why didn’t I keep those fun bell-bottomed jeans?’, but it’s rare and no big deal.

Having a big home clear out is liberating and it helps other people.

Selling things takes more time and effort than giving it away, but if you’ve got the time, turn it into a money making project.

Once you get a handle on the clutter, make it a policy that anytime you bring something new into the house you have to get rid of something.

Keep a cardboard box at the ready and once it’s full, take it away and start over.

You may never find yourself getting rid of everything and living out of a pick-up truck, but take it from my mother who says: The less things you own, the more freedom you’ll enjoy.

Happy 70th Mom!  You make the world a better place. 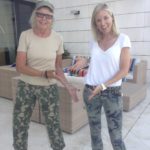 In the comments below, share what you think. Are you a bit of a pack-rat or more of a minimalist? What do you feel sentimental about getting rid of? Are you more likely to sell or give stuff away? Do you agree that less things means more freedom?